Had a good start to my crafty weekend with the first night of the Treasured Memories Flamingo themed crop.  We got so many cute things in our goodie bags it was easy to make some fun stuff! First thing I did was the make n take - a cute little candy holder. 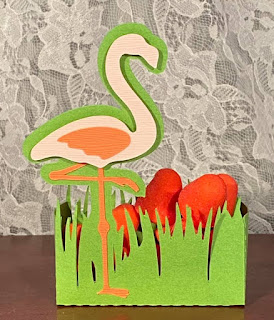 Next up was the first challenge - Flamingo inspired. I scraplifted an idea that another friend did and used one of die cuts we got to make a cute card! 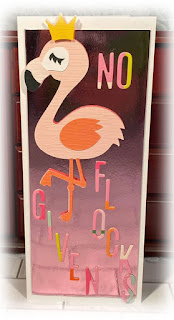 I was tired after a long day/week, so I only did the one other challenge before I headed off to bed. This time the challenge was to do something summer themed, so I decided to start another cruise album. And I used more of the cute die cuts and ephemera we got for this layout too. 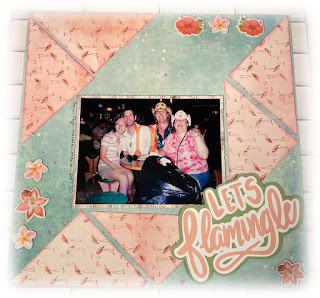 And for a change I finally won a prize! I put my name in for one of the folios that they were giving away as a door pize and I actually won it! It has been a while since I won a prize at a TM crop! 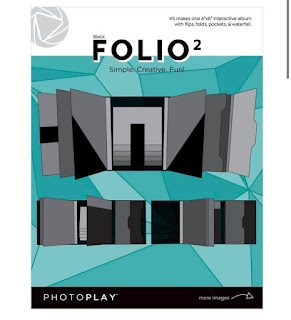 It was getting late at this point and I did not really have the brain power to start my swaps yet, but I didn't really want to be done yet, so did one more small project - I made one of the die cuts I got from TM a while ago - a parrot. I plan to use it on another layout for the cruise photos I just started (since one of them is a parrot photo!!) 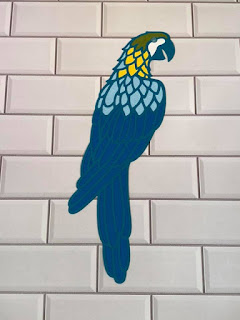 And even though I didn't end up going to sleep that early, I am already awake early today and all ready to keep creating! So till next time, stay safe and stay crafty my peeps!!
Posted by Buffylongard at 09:00